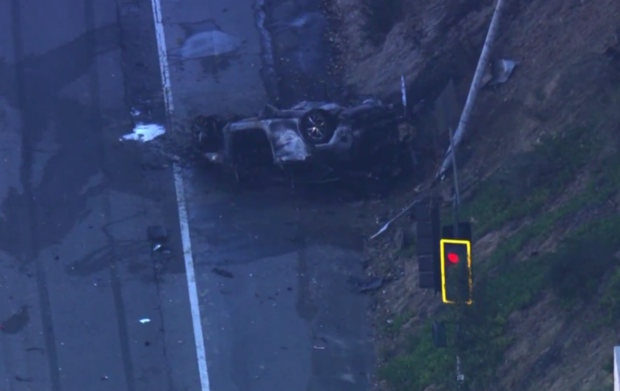 CBS NEWS — Stephen Levey was riding his motorcycle along Pacific Coast Highway on November 14 when he was nearly killed in a multi-vehicle crash.
Wild footage of the crash captured by Levey’s helmet camera shows a truck flying through the air toward him as he sat a red light on PCH and Kanan Dume Road.

The truck landed on top of him, sending him to the hospital via helicopter.

According to investigators, the truck was broadsided by a driver traveling at extremely high speeds behind the wheel of a Lexus that had run a red light, causing the grisly crash.

The driver of that Lexus died at the scene after the car burst into flames following the collision. The Lexus was stolen, according to the L.A. County Sheriff’s Lost Hills station.

Investigators said the truck driver survived the crash but did not disclose whether the driver suffered injuries.

While he considers himself more than lucky to have survived the terrifying experience, Levey is now left with both physical and emotional damage.

“As bad as this is, and it’s bad, boy, do I feel lucky,” Levey said. “I can’t believe I walked away from it without paralysis, a lost limb, brain damage.”

He did, however, suffer an injury to a limb he uses on a day-to-day basis to earn an income. As a professional photographer, Levey requires full use of his right hand, which he says was shattered from his elbow to his fingers.

“I now own quite a bit of titanium, which I did not want.”

Additionally, he suffered nine broken ribs — one of which punctured a lung and caused it to collapse — as well as injuries to his right leg and foot.

As he works to bounce back from the life-changing incident, Levey has learned that he may not receive insurance money to help him cover medical expenses because the car that caused the crash was possibly stolen.

“That person was in a rehabilitation center and either escaped or was let out early for some reason,” said Brian Breiter, an attorney. “We’re still trying to get to the bottom of that.”

He and Levey are asking anyone with more information on the crash, or who may have witnessed the moments leading up to it, to contact them as soon as possible.

“Stephen’s looking at lifetime of debt as a result of something he had nothing to do with,” Breiter said.

Unable to return to work for the foreseeable future, with his surgeon unsure if he’ll ever be able to operate a camera with his right hand again, Levey hopes that community members can come together to help him cover the mountain of medical expenses facing him.
“I’m preparing for the worst since it looks like we’re going in that direction,” he said.

We wish a quick recovery for all victims involved in this crash during this very difficult time.