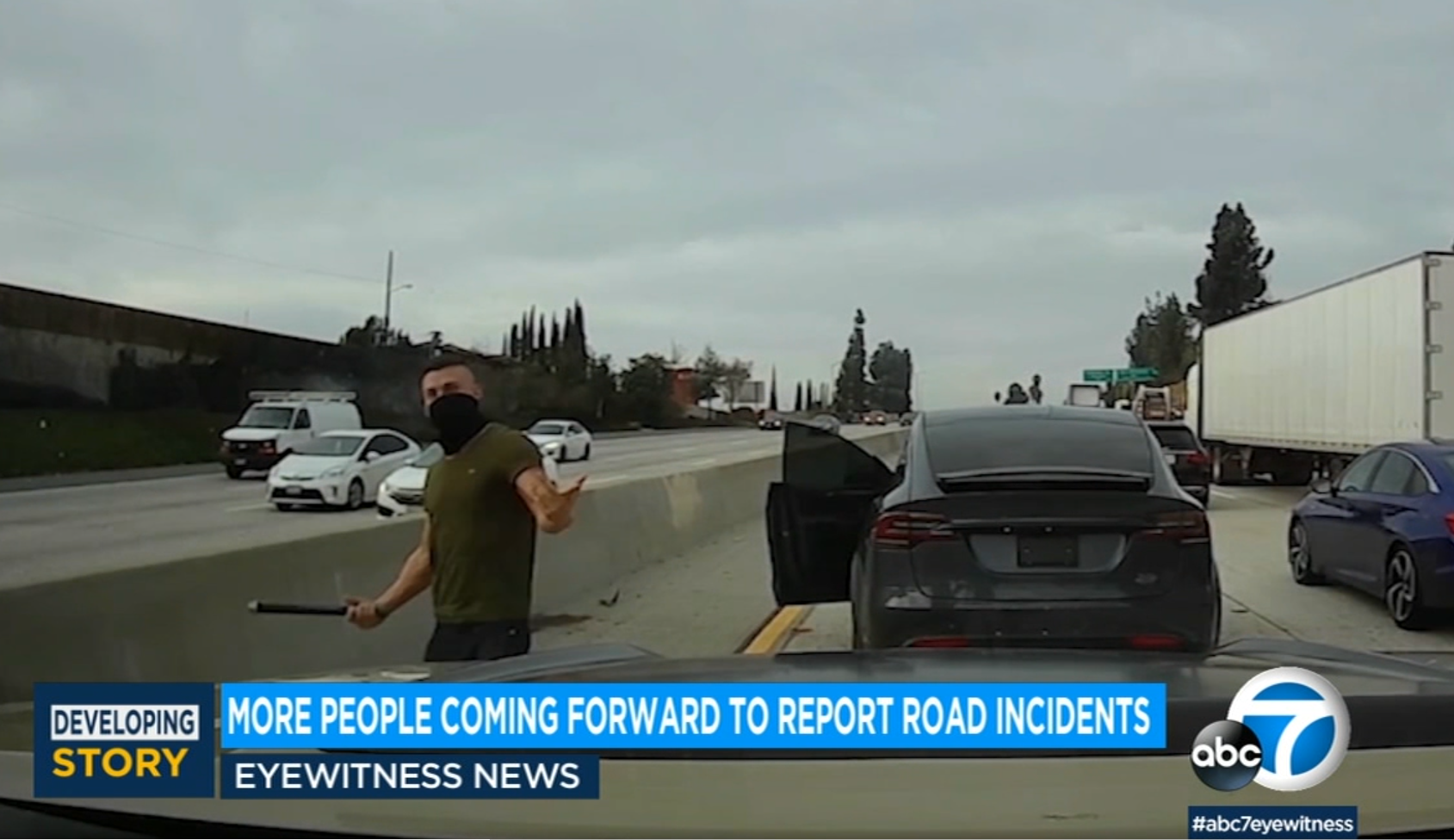 Police are searching for information on a suspect connected to a road rage incident that was caught on camera in Glendale on Tuesday.

CBSNEWS – Wild cellphone footage shows a Tesla swerving in front of another vehicle in the southbound lanes of State Route 2, just north of the York Boulevard offramp, during the morning commute at around 8:30 a.m., before the driver abruptly exits the vehicle armed with a what seemed like a metal pipe.

The man then starts hitting the driver’s door and window of the second vehicle before reentering the Tesla and fleeing from the scene.

The victim, who did not want to be identified, said he also recorded the suspect trying to hit another car with the people. However, that driver was able to get out of harm’s way. The victim said he was trying to get the suspect’s license plate on video.

“The guy notices that I’m recording on my iPhone so he tried to chase me down,” the victim said.

The man, who was still rattled by the attack, said that he just got his truck two months before this enraged man decided to smash it.
On top of the cellphone footage, California Highway Patrol officers are using the victim’s dashcam footage in the incident for their investigation.

KABC – Others are now reporting encounters with the same man in Atwater Village, Echo Park, and Pasadena over recent months.

One woman says she encountered him at a storage facility in Atwater Village two months ago.

When she turned a corner, the man was there and he got out of his car, unprovoked, and started harassing her.
So she started recording.

In the video, he appears to be driving the same Tesla and dressed in similar clothing.

Afterward, she says she reported him to the storage facility management, then tried to move on with her day.

In another encounter, he was seen reaching out from his own vehicle to hit another as he passed by on a Pasadena street.
Another video in Echo Park shows him getting out of the same charcoal Tesla with no rear plates on the 101 freeway and hitting the front of a car with a pipe.

After the most recent encounter on the 2 Freeway this week, the man whose vehicle was struck continued recording, and saw the man in the Tesla pull over and attack another driver.

That second driver told Eyewitness News she had honked at the driver in the Tesla on the freeway.

“All I did was, because he was taking forever to merge, so I just honked,” she said.

The video shows her swerve to exit and he then jumps out of his car and runs toward her, before she is able to drive away. But not before he swung the pipe and damaged the side of her car.
“I honestly did feel like he was either gonna break my windows or pull me out,” she said.

Now she has to deal not only with the trauma but with the damage to her car.

“This is my only vehicle. It took a long time to buy a new car, and a few years ago I bought a new car that was economical for me and I don’t know what I’m gonna do. It’s scary.”

If you have been injured in a road rage incident in Glendale or any other place, an experienced personal injury lawyer can make you assure that your rights are protected. The Law Offices of Burg & Brock has offices throughout California.