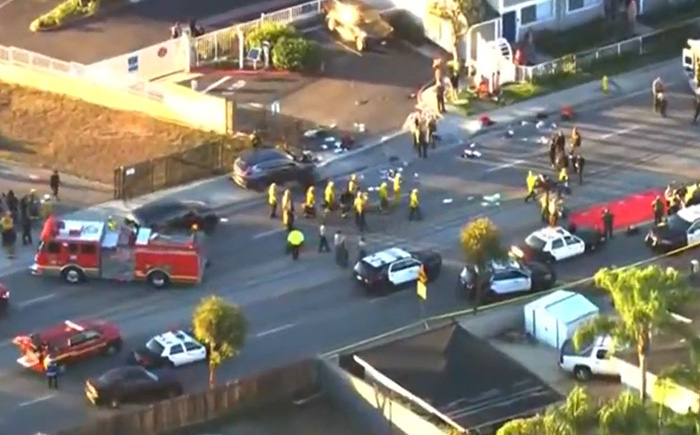 CBS Los Angeles – Several recruits with the Los Angeles County Sheriff’s Department were injured when a Honda CRV hit a group of runners near a sheriff’s training academy in the Whittier area.

“Tragedy struck our department,” said Sheriff Alex Villanueva during a news conference Wednesday.
The SUV was reportedly driving on the wrong side of the road and swerved into a group of 75 cadets running. According to the Los Angeles County Fire Department, 25 recruits were injured in the crash. All victims were taken to multiple hospitals in the area. Those with the worst injuries were taken to UC Irvine Medical Center and St. Francis Medical Center.
The driver, identified as 22-year-old Nicholas Joseph Gutierrez of Diamond Bar, was taken into custody near the scene of the crash.
Thursday, he was arrested and booked on suspicion of attempted murder of a peace officer. He is being held without bail.
The crash was reported at about 6:30 a.m. near Mills Avenue and Trumball Street. The recruits are with a class assigned to the STAR Explore Training Academy.
When asked if he had ever seen a tragedy like this in his career, Sheriff Villanueva said this is “very odd, to say the least.”
Villanueva said the driver of the SUV passed an alcohol breathalyzer test.
He added the training class included recruits from various law enforcement agencies, and the group of injured trainees includes two each from the Bell and Glendale police departments and one from the Pasadena Police Department. The rest were all sheriff’s department trainees.
The vehicle was reportedly going about 30-40 mph at the time, authorities said. Some recruits on the scene reported hearing the car accelerate before it hit the group of runners, Villanueva added.
“We had the sheriff’s cadets running in formation going north on Mills Avenue. We had a vehicle going southbound. For reasons we’re still determining and investigating it veered into opposing lanes and struck multiple cadets,” said CHP Assistant Chief Charlie Sampson during a press conference Wednesday morning.
A resident who lived nearby said the screams for help woke him up.
“It’s one of those horrifying screams of panic and fear,” said resident Francisco Silva. “It had such a horrifying feeling to it.”
Paramedics sent up a triage area at the scene and transported the injured for hospital treatment, many of them reportedly in critical condition.
“This was a typical run that we do during the 22-week program that we have at the sheriff’s department,” said Captain Pat McDonnell of the LASD. “They proceeded on their run. Once they got to Mills Road they made a northbound turn using safety vehicles to block traffic accordingly.”
McDonnell added that’s when the SUV slammed into the group of runners. He added there was a light pole on the east side of the street that the vehicle then hit and stopped.
“The hardest part is finding each victim,” said Ret. Fire Captain Rick Godinez of the Los Angeles City Fire Department to CBSLA Wednesday morning. “There are red, yellow, and green tarps used by first responders to categorize the victims.”
Godinez added red tarps are utilized for those that need to get to the hospital first.
Villanueva said the class consists of 75 recruits.
“First responders will start to reach out to hospitals to start diverting the victims to each victim to different hospitals,” said Godinez.
The circumstances of the crash were under investigation. Authorities served a search warrant at the driver’s house Wednesday evening.
Law enforcement agencies across the Southland quickly began sending words of support to the sheriff’s department in response to the tragedy.
The Association for Los Angeles Deputy Sheriffs, the union that represents deputies, said it was monitoring the unfolding situation.
“We appreciate your thoughts and prayers for the injured cadets and their families,” the union tweeted.
Los Angeles County Supervisor Kathryn Barger issued a statement saying, “I am shocked to hear that a driver plowed into a group of young sheriff’s academy cadets during their morning training run. These individuals represent the future of law enforcement, they have incredible courage and my utmost respect for wanting to serve their communities. I’m tracking this incident closely — it’s senseless and tragic. From the bottom of my heart, I am hoping no one was seriously hurt.”

We wish a quick recovery for all victims involved in this crash during this very difficult time.

The photo above is from NBC Los Angeles video footage.